Any significant intervention that is going to use H3Uni facilitation methods needs to start by agreeing an overall scope of the issue that is to be explored.  People are being convened because there is some area of concern that they share, though they will bring to it very different understandings of how it should be thought about and addressed; depending on the situation there might be very deep disagreements and issues of power at stake in what gets discussed that may be reflected in who is in the room and who is excluded.

The development of a short Scoping Statement helps set the direction of exploration such that the differences can be brought into the process, so the purpose of the scoping step overall is to orient the activity in a helpful way for the facilitator and participants.

In this tutorial we look at scoping a Three Horizon mapping process, which sits at the start of the process like this: 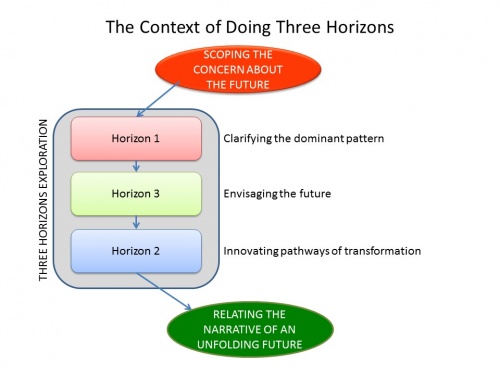 An example of a scoping statement is: 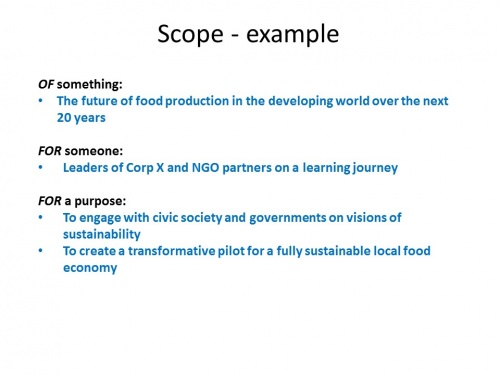 The same scoping preparation is useful if you replace the box with the horizon method with another method, for example Dilemma Navigation or Hexagon Mapping.  To keep things simple, this tutorial is just concerned with scoping Three Horizons, and a second tutorial explains the more general use.

Convening the group is the process that leads up to the meeting, and will play a major role on what discussion gets into the room and what is left outside.  This tutorial does not deal with those issues, but assumes that people are arriving already bought in to the fact that they are giving time to a shared area of concern.  It will be the job of the leader and sponsor of the process to introduce the issue in a way that sets up the rest of the process, and then hand over to the facilitator.

See the more general discussion in the H3Uni Practice Framework. 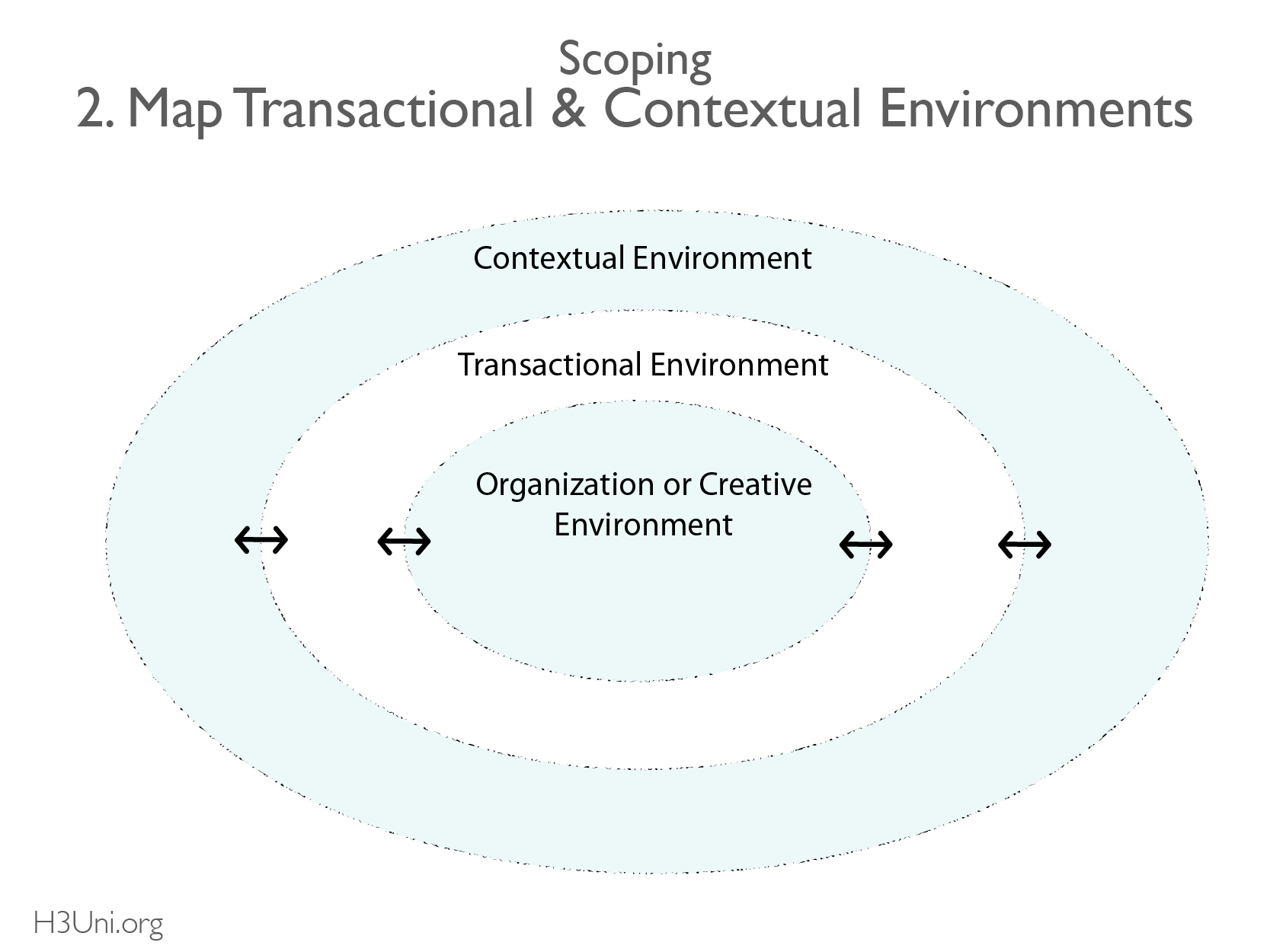 A helpful conceptual tool for developing the scope for three horizons and other methods is the distinction drawn in strategy work between the transactional and contextual environments.

In the centre of the diagram below is the organisation which has the agency to influence and even create important aspects of the future of the area of concern identified in Step 1.  We sometimes refer to this organisation as an integrity to emphasise that it does not have to be a formal institution but might be a group of people pioneering change who work together to sustain a path of action.

The boundary between the contextual and transactional environment is not defined in any set way, and an important part of any change project is to explore how we might ‘convene the future’ by bringing new configurations of actors together who can shift the pattern and its boundaries.  When situations have the potential for transformative change it is also likely that it will come from actors currently on the margins who may or may not be visible at the moment.  Some of these will turn up as third horizon ‘pockets of the future in the present’. This can apply also to resolving dielmmas and solving complex problems.

The most difficult and messy problems defy any simple understanding of where they begin and end, of causes and effects.  In these cases, the definition of the scope all depends on how you think about the problem. By keeping transactional and contextual boundaries constantly in play, we can explore the possibilities for transformative change as we move from first to third horizon.

The Scoping Statement for Three Horizons is:

The purpose of establishing a scoping statement is to set off, as if on an expedition of discovery, with a shared intent, but staying as open as possible to what might be discovered on the way.  Developing the statement should not become the journey.  If it generates a lot of discussion and doesn’t converge then ask the leader of the group for guidance, and be ready to keep it fairly open to allow learning.  The ambiguity in the scope is important information about what needs to be explored, not a failure to define objectives of the work.  As facilitator you can give the group confidence that this openness can be handled through the process. 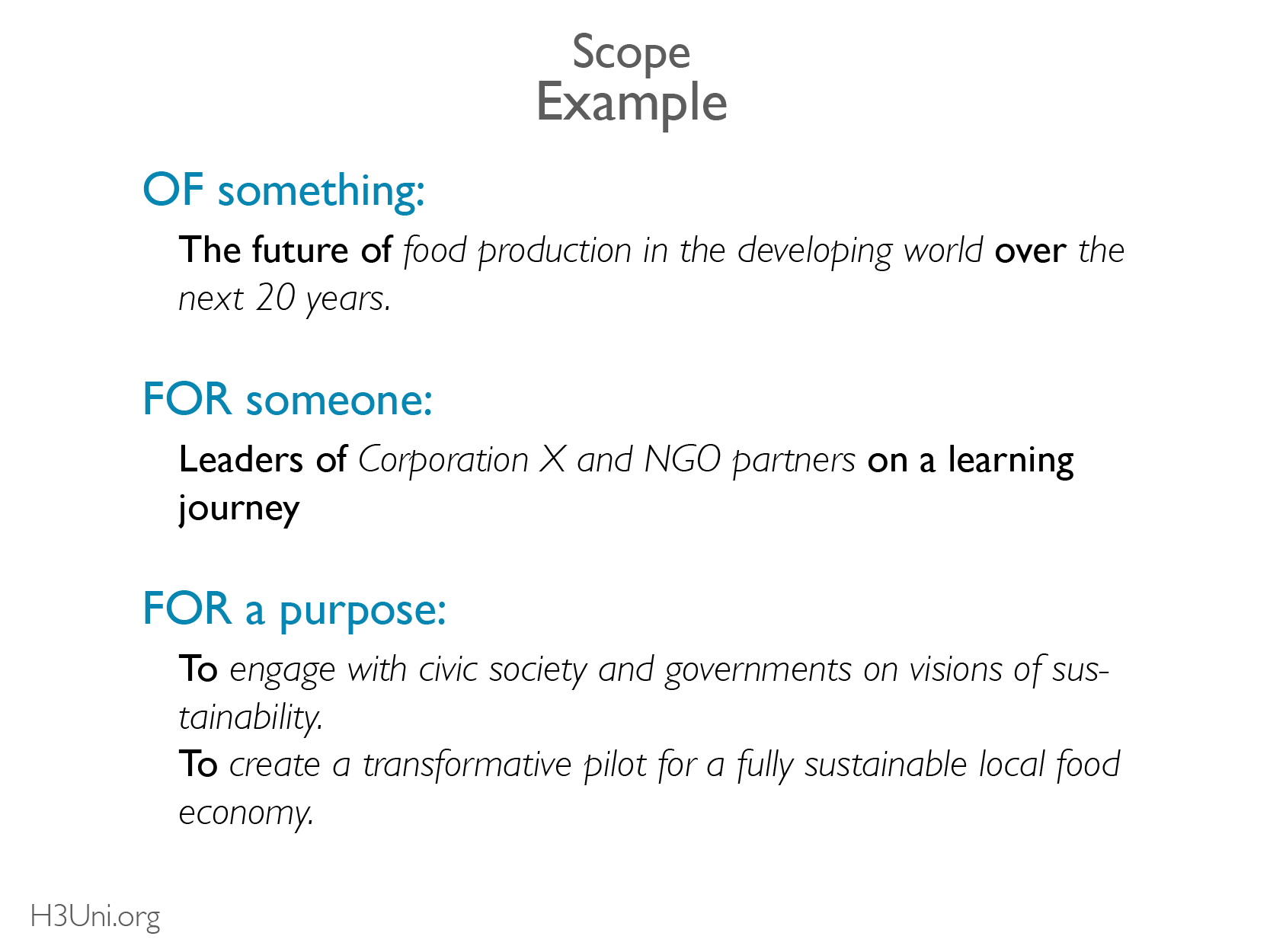 Decide on the matter of concern for which you will develop a scoping statement suitable for a Three Horizon conversation.  For this exercise you are the convenor of the conversation, so you can imagine how you might set the scene with the other people.  Draw up the contextual/transactional diagram on a large sheet of paper with room to insert stickies.

Ask what you see in the situation you are engaging with regarding:

Write the answers on stickies and populate the transaction zone with them.

Now populate the outer contextual area with observations about the major influences and trends which are shaping the transactional environment beyond any influence or control you could exercise.

Now develop a scoping statement according the format described above.

Scoping is the general method.   It can be very helpful to work with the lead sponsor of a process using Hexagon Mapping to explore the issue of concern, and make an influence map as a way of clarifying the scope they have in mind for the work, and then use that to set up the scoping process. 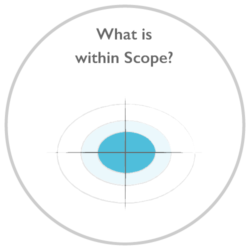