The dilemma framework enables the group to shift their orientation from either/or thinking (which won’t work in the given situation) to both/and (which can work) and use Dilemma Thinking and Generative Thinking to produce new options for action which integrate the two apparently conflicting values in innovative ways.

This method is especially useful for projects requiring a need for transformative innovation. In trying to make progress, especially on an innovation or change project, we often encounter pairs of conflicting values and demands. These can appear as tensions, polarities and even conflicts. Sometimes these are options and we can make a choice but sometimes they are both essential for success even though they are mutually exclusive or incompatible. This can become stuck in conflict. The dilemma method is a way to re-frame the conflict and tension into a process of learning and discovery that can take you beyond the impasse.

The process allows the people in the room to move from polarised opposition into a generative dialogue. The process respects the importance of opposing values and allows them both to contribute into a collective enquiry into creative opportunities.

The process exposes that there are four failure modes in the situation and only one success mode, making visible that if one party sticks to their own position nobody will get a solution.

NOTE: As well as application in general situations, this has a specific use in Three Horizons (see Three Horizons Mapping) to frame H2 as a dilemma between H1 and H3 in order to construct possibilities for H2+ innovations, and in conjunction with Navigational Scenarios (coming soon) to support a continuous action-learning cycle in the face of uncertainty as the project moves into H3. 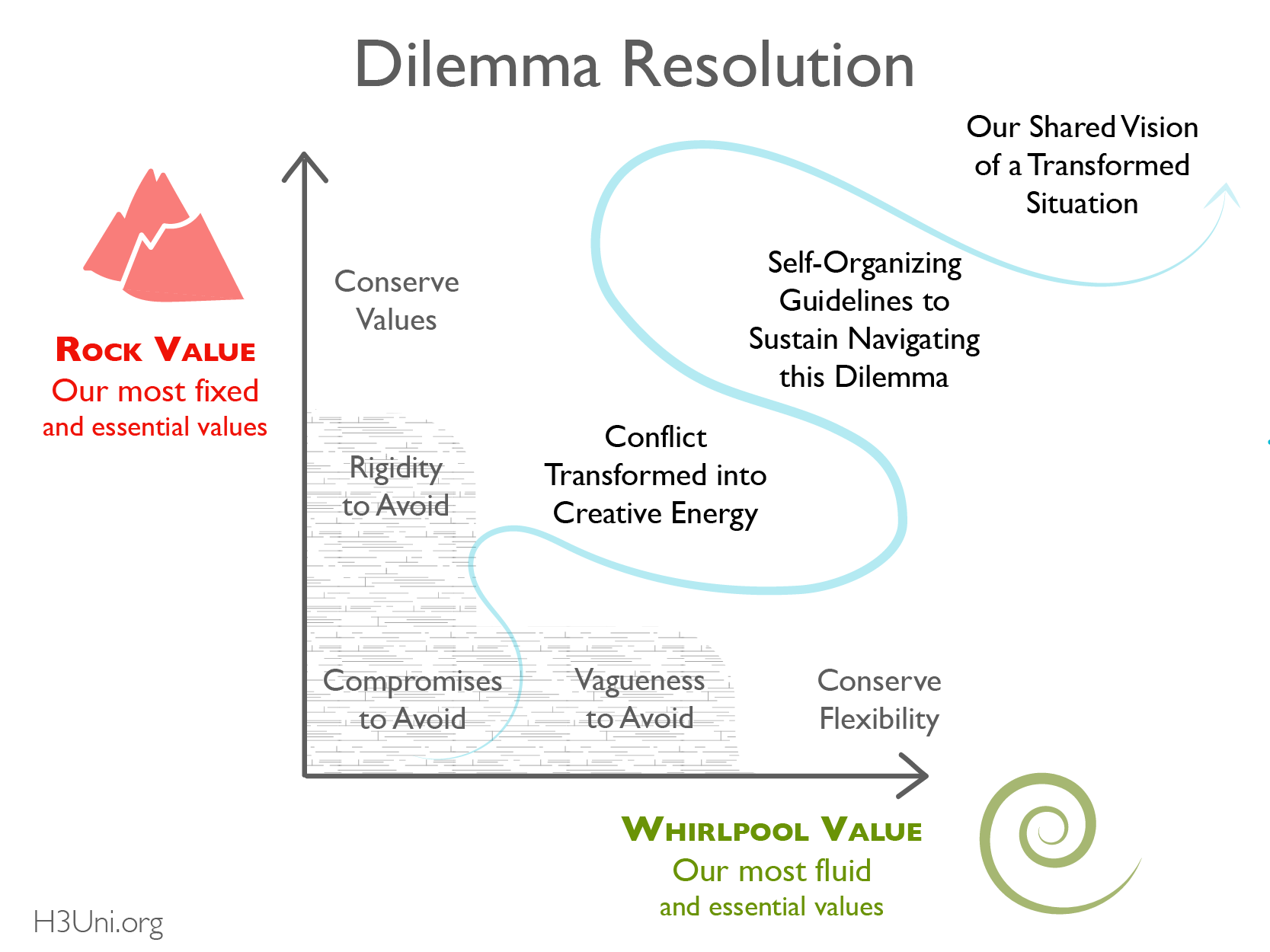 The simplest way to work with dilemma resolution is to use the representation of the dilemma as a space created by putting the two conflicting or contrasting values on the orthogonal lines instead of thinking of them as polar opposites.  The diagram then provides a way of framing the results of the process.

In the diagram, the vertical axis represents the more fixed values of the dilemma (hence the rock symbol).  The horizontal axis represents the more fluid values of the dilemma (hence the whirlpool symbol). A good outcome needs both values to be fully expressed in the resolution.  The pathway to resolution is represented by the diagonal wavy line.  The line is wavy because the process is dynamic and needs to be constantly adjusted from feedback.  This feedback needs to tell us whether we are heading too strongly towards rigidity or too strongly towards vagueness.  The pathway needs to avoid taking the ‘easy way out’ of compromise; it needs to navigate through the tensions of the conflict zone; it needs to generate self-organising guidance into the resolution zone; and it needs to arrive a shared vision of a transformed situation.

The main steps in facilitating a dilemma resolution exercise are shown below.  Although they are presented in a sequence through time they also should be viewed as a whole in that the steps are highly interdependent.  In a complex task it may be necessry to reiterate steps.  For example, it can happen that half way through an exercise a clearer dilemma is recognised that is better to work with than the initial one.  Facilitating a powerful dilemma resolution requires you to “ride the bull without falling off.” 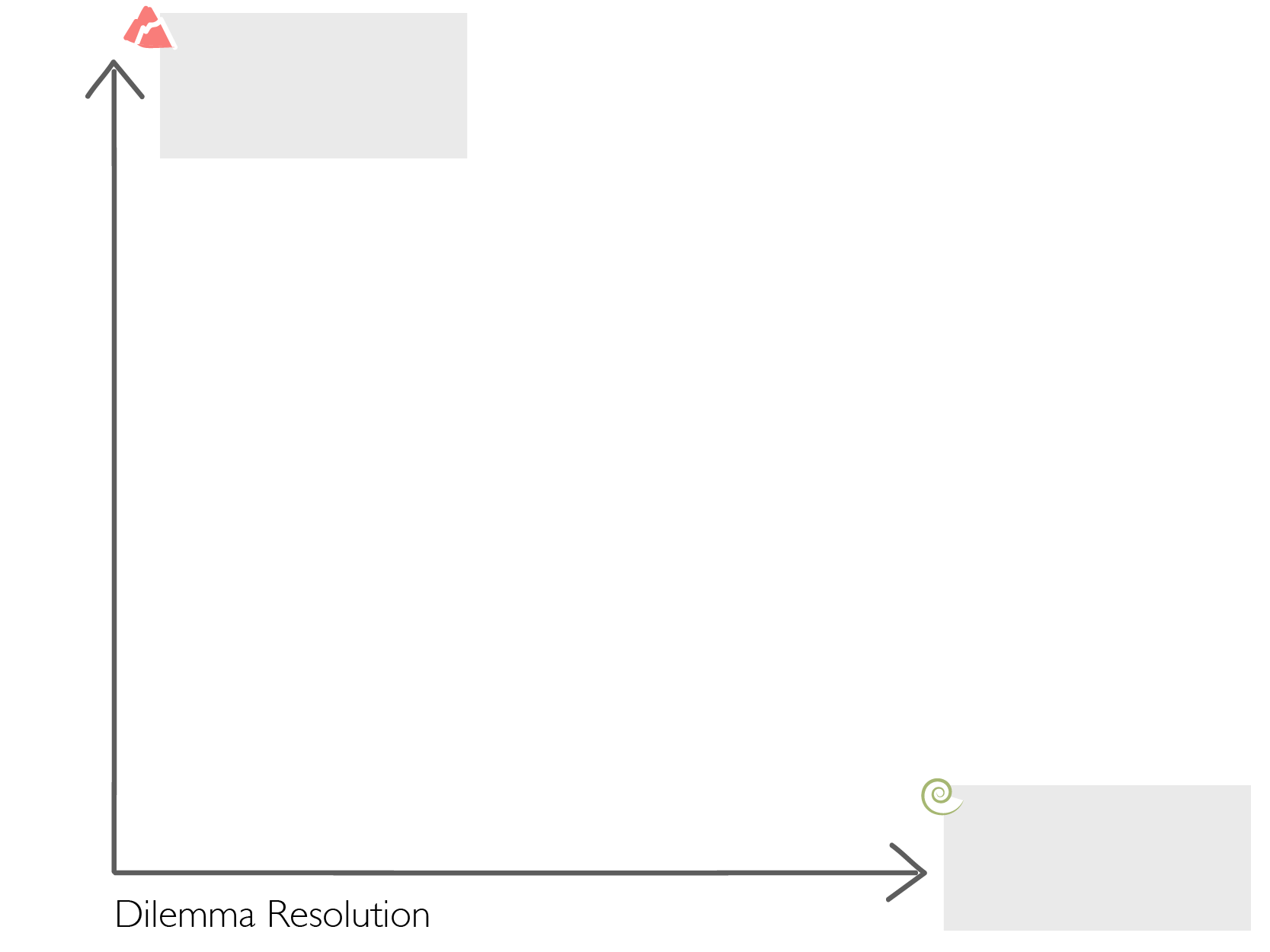 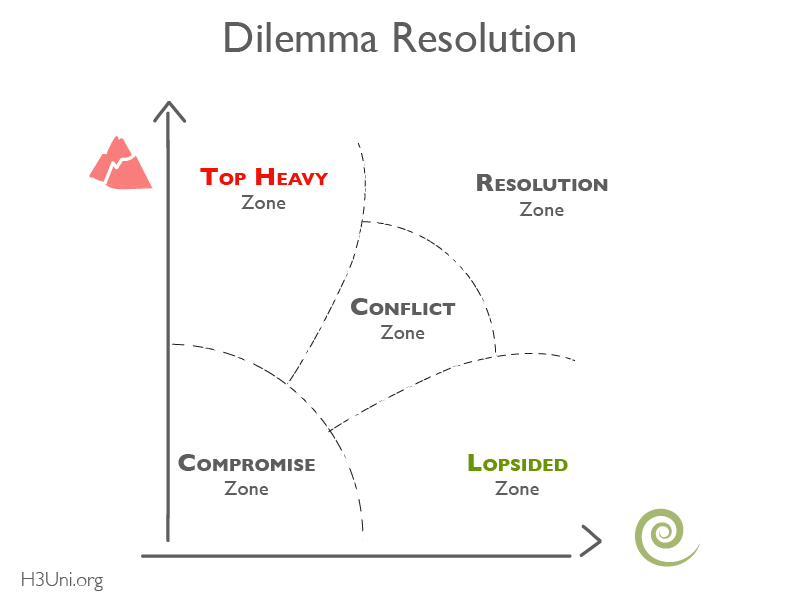 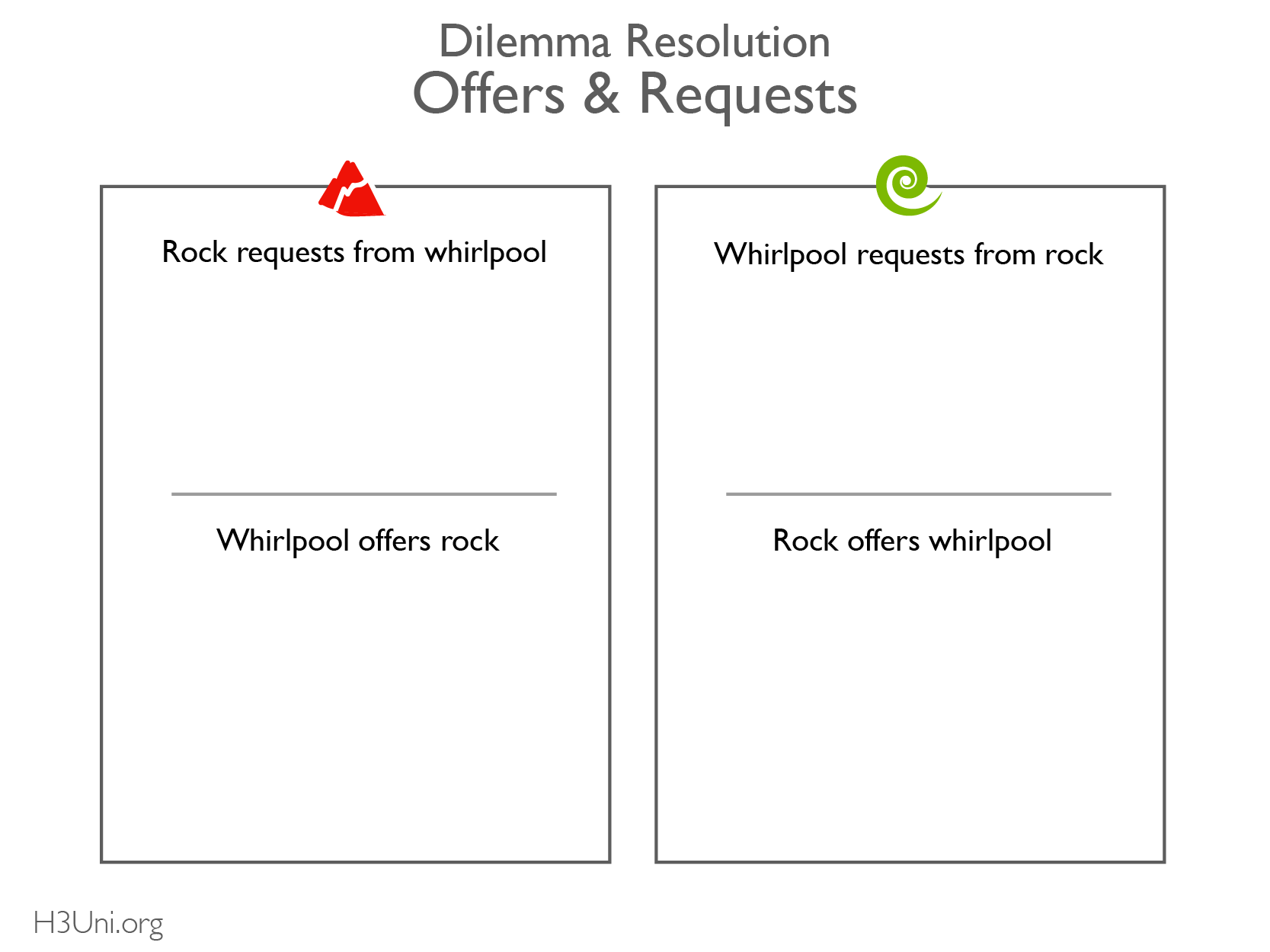 Set up a 2×2 frame on two flip charts as shown on the diagram above.

Put these questions to the group:

In the spirit of creative resolution:

Capture in the appropriate boxes.

This step uses Generative Thinking.  The process is to make pairs of rock and whirlpool and provoke innovative ideas for resolution of the specific dilemma. 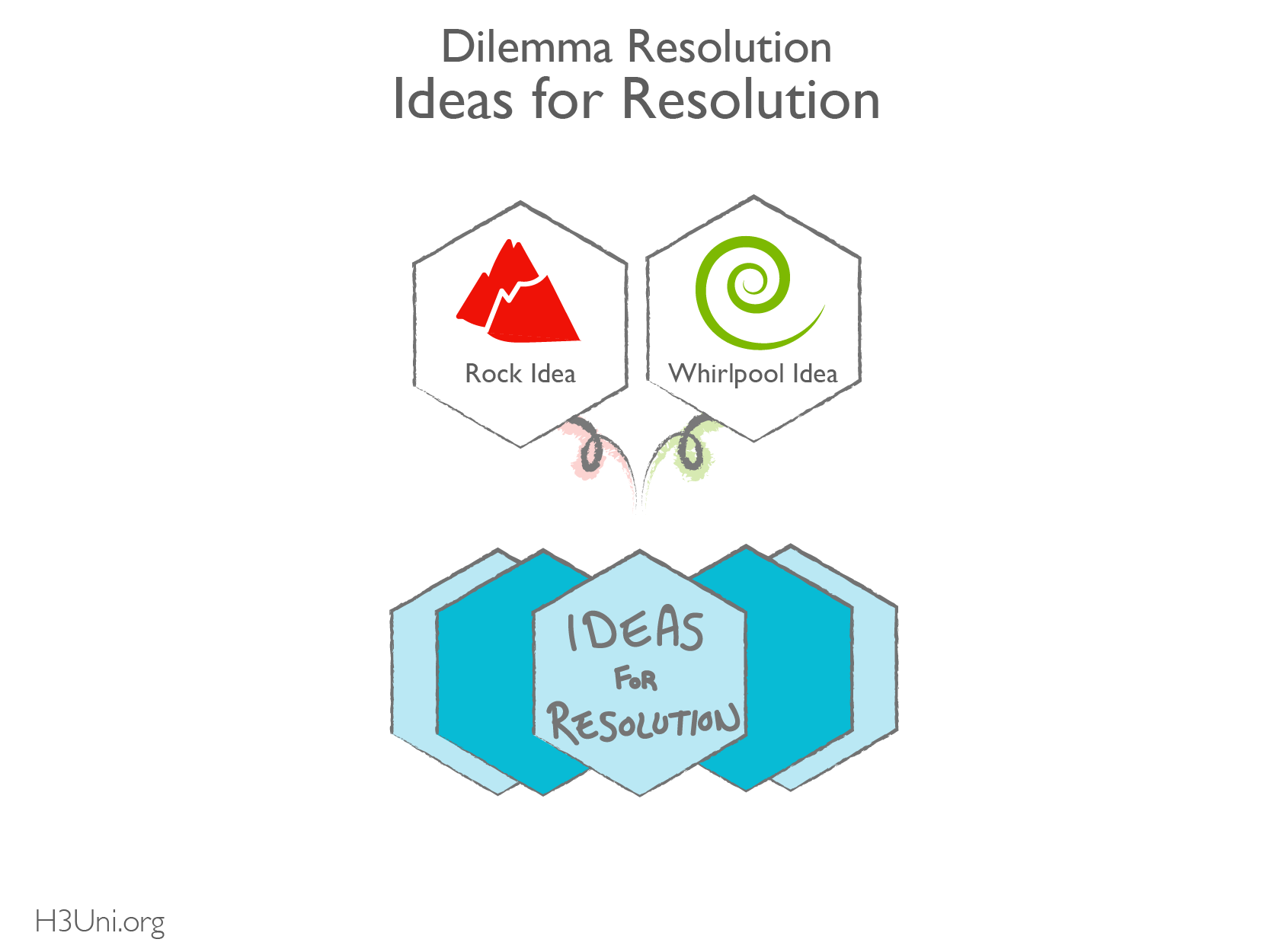 Note: a good resolution idea will incorporate both values evenly and yet also go beyond them to something new.

Note: if this proves unsatisfactory in the next step you can always return here and run through some different pairings.

Share reflections on how you think this idea will transcend the conflict zone and suggest a way of navigating the dilemma into the future.  You can consider its strengths, its weaknesses and what feels creative or unusual about it.

You can repeat this with other ideas from Step 3 to find the best one. 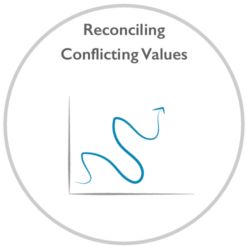